Tired of being overwhelmed? 😭 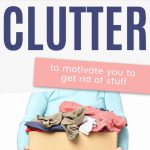 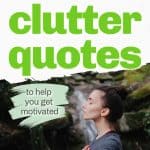 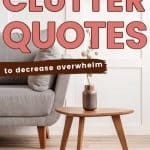 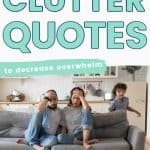 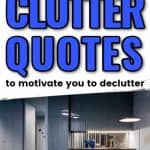 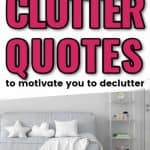 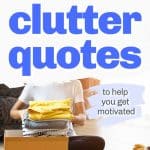 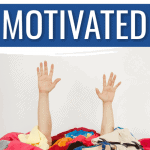 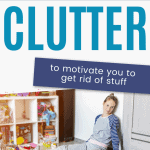 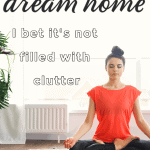 Inside: Here are the best clutter quotes to help you find the motivation to get rid of clutter. Clean out your house by clearing and letting go of the clutter.

You know what I hate? Trying to find motivation to declutter my dang house, I go to Pinterest to find some inspirational clutter quotes.

In between refereeing fights over who’s turn it is to shoot plastic cannons out of the toy pirate ship, I scroll…and scroll and scroll.

Before I know it, 30 minutes have passed and I’m no closer to feeling motivated to declutter my house.

Sound familiar? You scroll around looking for that one quote that will leave you feeling inspired, but get lost in countless blog posts with “64 quotes you absolutely must read if you want to declutter your home”

Well, I got your back friend.

Because, you see, it’s easy to go online and round up a bunch of clutter quotes. I have an entired Pinterest board about this thing.

But you know what’s hard? Decluttering all those quotes you found about clutter.

Paring them down until you find “the one” that strikes inspiration in your heart and causes you to instantly declutter your entire home..top to bottom, left to right.

So instead of dumping you into a landmine of clutter quotes, leaving you to fend for yourself, I’m here to help you out. Offer you a life raft.

I’ve carefully selected 5 quotes that I feel are hands down the best clutter quotes to kick your butt in gear. On top of that, I’ve broken down the quote into lay terms to help you apply it to your own life.

Let’s get to the clutter quotes, shall we?

“Clutter is nothing more than postponed decisions.” –Barbara Hemphill

Let’s be honest, that zoodler you asked for for Christmas 3 years ago with the vain hope you’d make noodles out of zucchini and start living your best life…

You’re never going to use it.

I don’t know about you, but every time I attempt to declutter, I start with great intentions for this to finally be the time I get rid of stuff and make my home look like a hotel.

But about 5 minutes in, I’ll happen upon something that I totally forgot I had and would’ve been totally cool if it had disappeared in a black hole without my knowledge…

But now that I know it exists, I can’t possbibly part with it, right? So I dust it off, move it to another part of the home in a poor attempt to “organize” and feel better about my life.

But the honest truth is, if you’re just shuffling things from one area to the next, you’re not decluttering, you’re procrastinating.

Make the decision to get rid of it once and for all. Before you have a chance to grow attached, shove it into a donation box and forget it ever existed.

#2: Stop Treating Your Home as a Storage Unit

“Your home is a living space, not a storage space.” –Francine Jay

My parents recently downsized their own home as well as selling my grandmother’s home when she passed.

As a result, they’ve had quite a bit of decluttering to deal with. The problem is, my family has never been good with decluttering. It’s something we all struggle with.

It never affected the quality of my childhood, as the most used areas were always pretty tidy. But there was the home office that was never used as an office. And the front closet that held so many coats, you couldn’t get any out.

I distinctly remember one drawer where we kept the pens being so jammed packed that I had to struggle and jiggle it just to get it to open an inch. I’d grab pen after pen until I found one that worked, then shoved and jiggled the drawer until it closed.

When I grew up and moved out on my own, in typical rebellion fashion, I refused to shove clutter in the closet and pretend everything was clean.

So I rebelled by keeping all my clutter out in the open for everyone to see. Which means, I never really wanted to invite people over.

And it was always difficult for me to find things when I needed them. And we had issues with spiders because spiders love cluttered spaces.

Moral of the story, as Francine Jay most eloquantly put it, don’t treat your living space as a storage space.

The life you bring to the house is much more important than stuff. Clear space so you have room to live life.

“The best decluttering project is one you can finish.” –Ayla Xiao

I’m going to give you a twofer on this one, because I also love this related quote that has nothing to do with decluttering:

“A journey of a thousand miles begins with a single step.” -Lao Tzu

If you’re currently living in a state of chaos and clutter, decluttering can seem so overwhelming. You have so much to do that you don’t even know where to start decluttering.

Unlike the articles that promise to teach you to how to declutter your entire house in a weekend, I’m going to sugar coat it: it’s hard work.

And it may take you months or years to declutter. I don’t tell you this to make you feel hopeless, because I honestly feel that if I can declutter, anyone can.

But instead of looking at the entire project, focus on finding small, manageable tasks you can complete every day.

And if you get stuck, just read this post about how write a far from overwhelming decluttering checklist by taking big projects and breaking them down into small, manageable tasks.

You can do this, one step at a time.

“Picture your dream home. I bet it’s not filled with clutter.” –Joshua Becker

Oh, Joshua Becker, you know how to punch me in the gut.

As I sit here writing this blog post, I’m typing at the kitchen table, covered in markers, my daily cleaning schedule, Yahtzee from the game we played earlier and a couple of water cups.

The playroom floor is covered in toys despite the fact that we cleaned up ealier today.

The living room has a desk (which I never work at because I prefer to work at the kitchen table), covered with a planner I used for a month before giving up, a sewing kit my husband used but never put away and a mess of papers I need to go through.

I totally agree with Joshua Becker that this is not my picture of a dream house.

But here’s the problem: my dream also forgets that I have two young kids and that I work from home in between play dates, refereeing fights and dealing with full-blown tantrums (from both the kids…and me).

So, while I think there’s a lot of value in this quote, I don’t want you to take it overboard. Life is going to have mess it in. Especially when that life includes kids.

But decluttering your home is not about getting rid of everything so that your house looks perfect.

But rather, it’s about getting rid of the stuff you don’t need so that those messes are easy to clean up.

The playroom will take me and my 5 year old less than 10 minutes to clean up. The kitchen table takes less than 5.

But the desk? Fuhgeddaboudit…it’s not hurting anyone.

Just kidding, it’s in my plans to declutter it (and even get rid of the desk because it just attracts clutter).

But I don’t stress about it because it doesn’t get in the way of me living the life I want to live.

Which brings me to my last quote…

#5: Stop worrying about what you’re losing

Instead of thinking I am losing something when I clear clutter, I dwell on what I might gain. – Lisa J. Shultz.

I found this clutter quote recently, and I love it!

When you’re decluttering, it’s so easy to focus on the things you’re losing. In some ways, you’re saying goodbye to the person you thought you would be.

I thought I would be the kind of person who makes zucchini noodles or whips up home made popislces from the juice I made from juicing the vegetables from my garden.

But alas…I am not.

But it’s hard to get rid of these things. Because it means admitting that I’m not that person and that’s like giving up a dream. It’s like a part of me is dying.

If you can relate, here are two things to consider:

Why It’s Okay to Get Rid of Clutter

#1: You can always buy the dang things again.

Let’s say you’re in a really busy season of life and you just don’t have the space to keep the crafting supplies you never have time for.

Just because you’re getting rid of them now, doesn’t mean you’ll never be able to do that hobby ever again.

Maybe you’ll get back to it once the kids are out of the house. Or once you stop working for that crazy boss. Or once finances aren’t so tight.

#2: You might actually prefer the space over the stuff.

Have you ever considered that you might like having space for things that you use on a routine basis?

You might not even miss the things you’ve gotten rid of.

Almost 99% of the time, I can’t remember a single thing I’ve decluttered once the donation box has left my house.

I don’t miss those things one bit.

On the rare occassion that I got rid of something I later on wish I had, often I find I can live without it anyways.

Want Motivation to Get Rid of Clutter?

Then be sure to grab this free decluttering checklist. You can track your progress and know step by step what to declutter, even if you’re overwhelmed by the mess.

Click the big orange button below to grab your free copy!