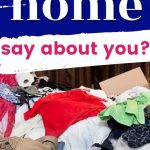 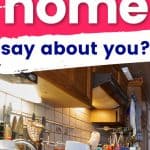 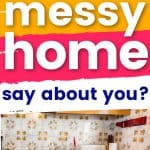 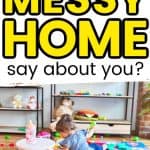 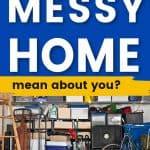 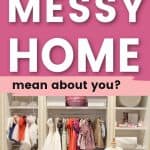 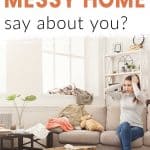 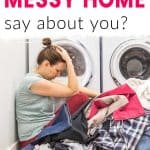 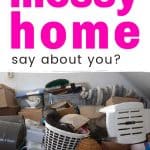 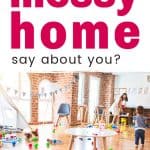 In this post: If you’re drowning in clutter and wondering what a messy home says about you, read this. I get what it’s like to be completely overwhelmed by the mess.

I’ve always been a messy person.

Growing up, my childhood bedroom was a mess. Clutter covered the entire floor with only a small pathway from the door to the bed.

In college, my orderly roommate balked when I jumped over my 3 foot wide mess to get into bed every night.

When I first got married, I convinced my husband to spend weekends playing video games instead of cleaning the house.

My messy habits were never something I enjoyed or was proud of, but the mess and I got along just fine, until…

The Moment When the Mess Became Too Much

In 2015, I gave birth to my first son, a collicky baby who never wanted to be put down and needed so much attention.

In the early days, he would only sleep on me…while I was moving. We grew to love our various baby carriers.

One day, on a brisk Wyoming spring morning, I walked with my baby warmly snuggled against my chest. He happily slept while I walked past the old homes in our neighborhood.

We walked past one house that would inevitably change my life.

Rusted swing sets, broken lawn mowers and piles of scrap metal covered the front yard. The front porch was so packed, you couldn’t see the windows or the door.

I’m going to be honest, I wasn’t polite when I first saw this house. I was very judgemental of anyone who would let their home get so messy.

Worst of all were the kids bikes in the driveway that gave evidence that kids were growing up in that house.


When You Point the Finger…

As the old saying goes, “When you point the finger, three point right back at you.” As I walked past that house, I started to think of my own messy home.

I thought about the bad habits my son would learn just by growing up in a messy home. I could either fight the uphill battle to change my messy ways or inadvertantly teach him to be a messy person.

I decided to go with the first option.

So I set to work to declutter my home. Over the past 5 years, we’ve gotten rid of 75% of our stuff, one layer at a time.

I think of decluttering as pulling back the layers of an onion. Sure, it’s tempting to think you can declutter fast, but I think this is unrealistic for most people who truly struggle with clutter.

It wasn’t that I didn’t know how to get rid of clutter. Decluttering isn’t rocket science. You keep what you need and get rid of what you don’t. Easy peezy, right?

I read countless books, tried countless decluttering methods, but nothing seemed to work. The problem is that most books about decluttering are written for people who have a layer or two of clutter and don’t have an extreme emotional attachment to clutter.

I, on the other hand, DID have an extreme emotional attachment to clutter. I watched various hoarding tv shows and could totally relate.

Most decluttering methods asked me to take everything out of a drawer or closet and go through everything at once. The only problem was, I didn’t have any extra space to pull things out.

All the horizontal surfaces in our home were filled with clutter…because they had nowhere to go. Kind of like the decluttering chicken and the egg:

I couldn’t declutter the table because I had nowhere to put the stuff, and I couldn’t pull things out of the drawer because there was no room on the table to sort through them.

But worse than the state of my home…

In addition to my extreme attachment to clutter, there was something lurking deep beneath the surface. Something I didn’t even know existed, let alone could tell anyone it was there.

Worse than the state of my home…was what I felt it meant about me.

Sure, my home was a mess. But worse than that were the negative stories I told myself.

I constantly thought “What’s wrong with you?” “Why can’t you figure this out?” “Why are you so lazy?”

No matter how much I followed the strategies and the plans, I just couldn’t figure out what was wrong with me.

My friends all had demanding jobs, all while raising small kids and putting home cooked dinner on the table every night. They made crafts for grandparents, kept a clean house and had time to volunteer in the community.

Meanwhile, I was over here just trying to remember to put the wet laundry into the dryer before it started to smell moldy.

I thought it was just because I was lazy or because I just hadn’t learned the perfect strategy. I thought that I would never amount to anything, and that I was destined to live in chaos and filth the rest of my life.

What Does a Messy Home Say About You?

Hey, friend. If you’re here because you live in a messy home, I have something to say to you.

You know what a messy home says about you? Absolutely nothing.

A messy home is just that → a home that’s messy.

Nothing more. I promise.

You can shame yourself til the cows come home and that still won’t help you find the motivation to declutter.

Rather than living in shame, live in love. Here’s how you can do that.

I’m pretty sure there are some things that are good about your home. Sure, maybe it’s not social media worthy (a concept I hate anyways).

But what are the good things about it?

Whether you’ve been messy your whole life or it started when you had kids or recovered from an injury…it doesn’t matter.

We can be really hard on ourselves in the way we never would be towards friends or family. Can you imagine saying the same things you say to yourself…to a friend? To your mom? To your sister?

I would never tell a friend that she’s worthless and condescendingly ask “What’s wrong with you? Why can’t you figure this out?”

And yet, those were the kind of nasty words that were on repeat in my head…for years.

Give yourself some dang grace.

We didn’t come into this world knowing how to keep a clean home. In fact, humans have been hunter/gatherers for much of our existence.

So give yourself grace if you don’t know how to keep things clean or if you’ve never been taught.

Give yourself grace if you have been taught, but other issues got in the way of you using that knowledge.

We’re Here for a Purpose

Think about it. The fact that your two parents met up at the exact time that they did to create the human being that is you…it’s a stinkin’ miracle that you are alive today breathing the air that you’re breathing.

There are more important things to do in this world than shame ourselves for past choices.

After my first son was born, we had two devastating births by miscarriage. My heart was ripped into pieces, twice.

But the funny thing about it…if I hadn’t miscarried those babies, I wouldn’t have the second son I have today. Those two miscarriages needed to happen in order for the right genetic combination to line up for my son.

So, stop wasting your life worrying about things that don’t matter, like what people would think of your messy home.

You are here on this earth for something far greater than a home that is pleasing to unexpected guests.

What is your purpose? What lights you up? Focus on creating a home that is the launch pad for that dream to take hold.

You are worthy simply because you’re worthy.

When I started decluttering, I honestly felt worthless. I was a stay at home mom, but would end each day wondering where it went.

I felt like a failure because I didn’t cook, I didn’t clean and I felt worthless. But let me tell you:

You are worthy because you are worthy. You don’t have to do anything to earn your worth; you inherently have it.

Cleaning your home will not make you worthy…because you already are.

You are capable of having a clean home. I’m living proof that if I can declutter my whole home, anyone can.