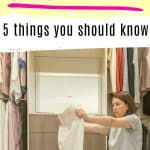 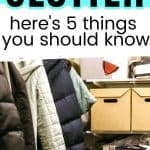 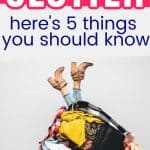 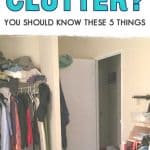 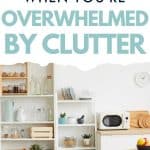 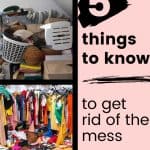 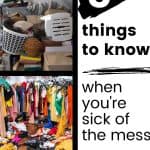 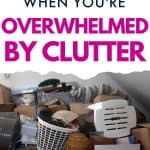 In this post: If you’re overwhelmed by clutter, here are 5 things you need to know before you start decluttering. #3 might surprise you.

I’ve talked to a lot of women about their homes. I’ve asked them all sorts of nosy questions from their cleaning routines, to how messy their homes get to what they learned about home management growing up.

And I’ve learned a lot of things.

Like how many homes that look tidy have that one closet or guest room that is packed to the gills with all the stuff that doesn’t fit anywhere else (like Monica’s closet on the old TV show, Friends).

Or how many homes that are impeccably clean take a lot of work to get that way (usually about 2 hours every day…and that doesn’t include dishes, laundry or cooking).

I’ve learned how many women hold negative feelings about their homes and how it affects many other areas of their lives.

If you’re overwhelmed by clutter, you’re in luck. In this post, I’ll cover the 5 things you need to know…and some of them might surprise you.

#1: Clutter Means Nothing About You

So often, the problem is not the stuff, but how we feel about the stuff.

When I was overwhelmed by clutter and barely surviving, I thought there was something wrong with me.

I couldn’t figure out why all my friends could keep a tidy home, all while working demanding jobs and raising small humans…and I couldn’t remember to put the wet laundry into the dryer before it started to mildew.

If you’re drowning in clutter and chaos and think there’s something wrong with you, know that there’s not.

Having a clean home doesn’t make people any more worthy. That’s because you’re worthy just because you are.

There are people who love you and want the best for you and they would be horrified if they heard the things you say to yourself.

Think about it, would you ever say some of the things you say to yourself…to your best friend? To your sister? To your mom?

We’re ruthless on ourselves and expect utter perfection. And that’s a problem.

Because when you can’t do anything right, you’re not motivated to work towards any goals, let alone having a clean home. You’ll spend your life berating yourself and living in chaos because you feel unworthy of the work it takes to make your life better.

Let me tell you, you are sooo worthy!

A messy home is just that — a home that is messy.

It doesn’t mean that you’re lazy or that you don’t care. It’s just the result of your habits and that’s good news because habits can change.

Sometimes, it feels like everyone else has it all figured out except for you. I get it.

I’m here to tell you, you’re not alone.

These statistics on clutter show us that 54% of Americans are overwhelmed by clutter. So even though it may seem like everyone else lives in a perfectly clean home, keep in mind that that might not be the normal state.

A lot of people have a closet or room where they stash clutter when company’s coming.

Just because you don’t see clutter in other people’s houses doesn’t mean it’s not there.

I’ve found it very therapeutic to open up and be authentic with my friends and family. I spent years being ashamed of the state of my home.

I felt like I was the only one with a messy house and therefore it must mean I’m failing at adulting (see #1). But the more I opened up with others about my messy habits, the more I realized I wasn’t alone.

If you’re overwhelmed by clutter but lack a supportive community, come join our Facebook group. There we can cheer you on, answer your questions and give you the virtual hug you need to get started.

I get so tired of reading decluttering blog posts that talk only about the stuff.

What stuff to get rid of first? How much stuff to keep? Blahdity blahdy blah. Sooo boring. 🥱

Because the reality is, decluttering is not about the stuff. It’s about the life you want with the stuff.

Someone who wants to bake more is going to have a lot of cookie sheets than someone who rarely cooks at home.

A family with 4 kids is going to have more stuff than a single person in their 20s.

And when we focus on the stuff, we’re missing the whole point.

Our homes are the launch pads for whatever we’re called to do in life. It’s hard to reach for our dreams when we’re struggling to find a pair of matching socks in the morning.

Women are the worst at this. We’ll say we’re not ready for that leadership role because we know that things are chaotic at home. We’ll turn down a date with friends because there’s no clean clothes.

Worst of all, we’ll put off our dreams and ambition until the perfect time has arrived, when perfection is a myth → it doesn’t exist.

The goal of clearing clutter is not to impress unexpected guests. It’s to create the foundation to build our dream life on.

Rather than worrying about the stuff, ask yourself what you want to do with your home. Then remove the blocks that get in the way of that dream.


#4: Decluttering is a Muscle

Do you stink at parting with clutter? Yah, me too.

When I first started decluttering 5 years ago, I had such a strong emotional attachment to clutter. It was so bad, I couldn’t even get rid of things that were broken beyond repair.

I had so much guilt for throwing things out. It’s a real thing called “landfill guilt”, and it happens when you feel guilty adding things to the landfill and contributing to the waste problem.

If you struggle to throw things out even thought you’re overwhelmed by clutter, here are lessons for you.

First, your home is not a landfill. You wouldn’t tell your family you’re moving them to the landfill, so why would you let the landfill live in your home?

You’re worthy of having a home you love, that’s free of trash and junk no one uses. Forgive yourself for the purchases and buy better quality items in the future (and yes, that usually means spending more).

Second, decluttering is a muscle. And just like any other muscle, you can build it up over time and things get easier.

I didn’t put pressure on myself to go through everything all at once. Rather, I worked on the easy stuff first, kind of like peeling back the first layer of the onion.

My first round of decluttering was like nails on a chalkboard. It was painful and I only got rid of a few things.

I could’ve stopped there and told myself that this was too hard and I would never be successful. But I didn’t. Instead, I kept going.

Every few months, I’d go through and get rid of another layer of clutter. And then another…and another.

And every time I decluttered, while in theory the items got harder, in reality it got much easier.

Because when you get rid of that first layer of clutter, you start to realize how much you like your new home. You like the progress you’ve made. And when you start to see progress, you’re motivated to declutter some more.

If you’re overwhelmed by clutter, just keep in mind that you’re learning a new skill. The more you practice, the better you’ll get.

Don’t be hard on yourself if it feel impossible to make decisions or if you don’t make much progress the first round. Any progress is progress.

We love the big transformation stories. We love to see someone lose 100 pounds in 10 months or go from couch to marathon.

We love these big stories that demonstrate what can happen when you put 100% of your focus and dedication to accomplishing a big goal in a short amount of time.

👉 And that’s the problem.

Because when something like 80% of people quit their New Year’s Resolutions by Valentine’s day…we have a problem.

And the problem is this: Expecting perfection out of ourselves.

Think about it. You go to declutter the kitchen, but when you walk by the TV, the allure is too strong. It draws you in, and before you know it, it’s way past your bedtime and you’re exhausted.

When you come to the kitchen the next day, it’s already late and you only have 30 minutes before bed. You know you won’t get through it all that night, so you postpone…again.

Before you know it, months have passed and the kitchen’s still a mess.

Let’s consider a second scenario: You go to the kitchen and spend 15 minutes putting things away and putting items in a donation box. It’s not a lot of time, but you make some noticeable progress.

The next day, fueled by your progress, you declutter for another 15 minutes. And you make a little bit more progress.

You do this every day (or most days) for a whole month.

Don’t be so enamored by the results of a big transformation that you miss out on the power of tiny baby steps.

If you’re struggling to find motivation in any area of your life, try this: set a goal to work for 15 minutes every day on that project. If 15 minutes is too much, try 10 or even 5.

The key to finding motivation is to make the goal so easy, you can’t say no.

4 Comments on Overwhelmed by Clutter? Learn These 5 Things to Get Rid of Clutter