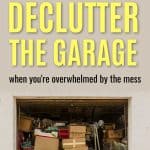 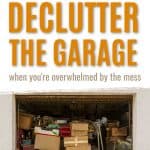 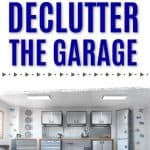 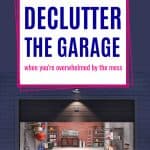 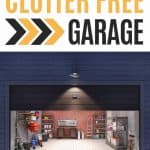 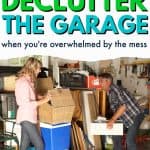 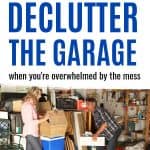 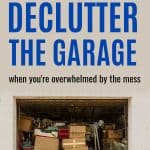 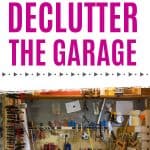 Inside: Is your garage storing junk while your car worth thousands is sitting outside? Learn how to declutter the garage, even if you’re overwhelmed.

I remember the garage of my childhood home. Packed to the gills with who knows what, the 2 car garage never knew what it felt like to house a car.

The only useful thing in that entire garage was the riding mower that my dad used to mow the lawn…oh, and my mom’s washtub bass (did I tell you come from an eclectic family?)

This is not to throw my parents under the bus. They’re not alone. And if your garage is so cluttered you can’t park a car in it, you’re not alone either.

And a good handful of neighbors park their cars in one side of the garage with a mountain of stuff on the other side.

You may be overwhelmed by the thought of decluttering your garage because it’s such a big project.

No worries, friend. I’m going to help walk you through the process by telling you step by step how to declutter the garage, even if the mess stresses you out.

This may seem like a weird, totally non-technical way to start out a garage decluttering session. But, in my experience, most people have a mental weight associated with clutter.

Five years ago, before I started my decluttering journey, I lived in a messy home with some rooms so packed, they were completely unusable.

Friend, let me tell you, if you’re here to learn how to declutter the garage: Your messy garage doesn’t mean that you’re lazy or that you don’t care. It has no reflection of your value as a human being.

Maybe your garage is so packed you can barely open the door and your neighbor’s garage is so clean, you could park two cars and still have room to tango.

That doesn’t mean your neighbor is a harder worker or that they have it all together. It just means their garage is more organized.

As you go through this process to declutter the garage, give yourself grace. Don’t be hard on yourself if you “let it get this bad”. It doesn’t matter if the garage has been messy for 2 weeks or 2 decades.

The cleanliness of your garage has nothing to do with the value you have as a human being.

When you go to declutter the garage, start with throwing out trash. This could include:

When I decluttered the garage, I struggled to part with broken items that could theoretically be repaired. I’m saying theoretically, because some of them I had held onto for years and never gotten around to looking at them, let alone fixing them.

Landfill guilt is a real thing, and if you struggle with it, know that you’re not alone. But here’s the thing:

Your garage is not a landfill. Don’t treat it as such.

I know it stinks to add things to the landfill, especially if you could theoretically fix them. But honestly, cutting down on the things going to the landfill…that doesn’t happen during the decluttering phase.

If you feel guilty about sending broken things to the landfill, be mindful when you buy things. Buy things that are made of good quality materials and are likely to last for years and years to come.

#3: Schedule Short Amounts of Time to Declutter the Garage

When it comes to any big, overwhelming project, it helps to break it down into small, manageable tasks.

Decluttering the garage is a massive project. If you follow the traditional advice of setting aside a weekend and going through everything all at once, you can overwhelm yourself into not starting at all.

You know how it goes…you get fed up with the clutter and make a bold declaration that you’re going to park your car in the garage after years of leaving it outside in the elements. You’re pumped, you’re excited and so you sit down to schedule a weekend to declutter.

“Well, this weekend won’t work. Megan has her recital. And next weekend, we’re going out of town.”

Before you know it, months have passed and you haven’t done a single thing to declutter the garage. Worse still, you might have even added to the mess by storing more things to go through “later.”

This is the problem with the all or nothing mentality. When you expect yourself to declutter the garage all at once, it’s very easy to procrastinate.

Because seriously, who wakes up on a Saturday, jumps out of bed, excited to declutter the garage? Not anyone I know.


Instead of dooming an entire weekend to declutter the garage, schedule a time and make a habit to go out in the garage most days.

Shoot for going out every day for a small amount of time, say 15 minutes, and stick with it as much as you can. If life gets busy and you miss a couple of days, it’s no big deal. Give yourself grace and jump right back in.

But the goal is to make the time so short, it’s hard to say no, even if you’re tired at the end of a long day.

Because here’s the truth: You will make more progress by showing up and decluttering the garage every day for 15 minutes than if you set aside a weekend but always procrastinate.

Look at your schedule. When’s a good time every day to declutter the garage?

Maybe it’s first thing in the morning while you’re waiting for your coffee to brew. Maybe it’s during the few minutes of extra time you have as you wait for your kids to put on their shoes. Or maybe it’s at the end of the day, after the kids have gone to bed but before you sit down to watch some TV.

And honestly, if 15 minutes feels too long and you find yourself procrastinating or coming up with excuses, make the time shorter. Set the goal at 10 minutes or even 5.

15 minutes is a good starting point. It’s long enough to get a surprising amount of work done…but short enough that most days you can force yourself to do it.

The important part is to pick a time so short, you can’t convince yourself of a good excuse to skip doing the work.

Instead of taking the all or nothing approach, you can find much more progress using the baby steps approach.

Essentially, you take any large project like decluttering the garage, and break it down into small, manageable tasks.

You keep breaking down items until each item is so stinkin’ small that you can do it in one session of 15 minutes or less.

Your big, overwhelming project is to declutter the garage. Here’s how we would break it down into more manageable tasks:

Declutter the garage → Clear off work bench → Put screwdrivers back into tool box.

The big goal of decluttering the garage is massive and overwhelming. Clearing off the work bench is a smaller project, but it could still take a couple of hours to complete.

However, the task of finding and putting screwdrivers back in the tool box? That’s totally doable.

Learn more: How to write a decluttering checklist that actually works.

Let’s say you put the kids down for the night and have the goal of decluttering your garage for 15 minutes.

You’re exhausted; it was a long day. Your 2-year-old pulled all the plastic containers out of the drawer, put his paci in the dog water bowl, and found a stack of staples in your desk.

The last thing you want to do when you’re exhausted is to go into the climate uncontrolled garage and go through stuff.

Obviously the second option. I bet you can even feel how your body physically reacts to the two scenarios.

In the first scenario, your body was like “Uh uh, no way. I don’t care what you want to do, I’m going to go sit on this cushy couch. The garage will still be there tomorrow.”

But in the second scenario, you probably didn’t feel the physical recoiling. Instead, you might’ve even throught “Hey, that’s easy! I can do that.”

And it feels so easy and manageable that you can already feel the sense of satisfaction after completing this one, simple task.