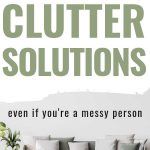 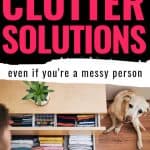 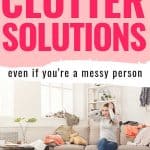 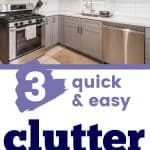 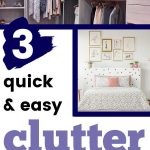 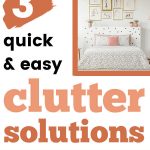 In this post: Learn 3 quick and easy clutter solutions to help you get organized, even if you’re overwhelmed by a messy house.

Okay. So you’re overwhelmed by a messy home but you don’t know what to do or where to start. I totally get it.

But when I was in the thick of my clutter and chaos, I found so much useless advice about how to handle clutter (some of the advice was very costly).

So in this post, I’m going to go over the 3 clutter solutions I’ve found that have drastically decreased the amount of clutter in my home.

This may seem obvious, but if you want to have less clutter, you need to keep less stuff. More items in your home means more things you have to keep track of.

Think about it this way. Let’s say you have a bunch of items that you keep on your kitchen counter for daily use. Once your kitchen is clean, your counters hold:

So, it doesn’t take too many items out of place for your kitchen to start looking cluttered.

Let’s say instead that you have a relatively cluttered kitchen. This means that there is room in your cabinets for the stuff you use on a daily basis, therefore you don’t need to keep them on the counter.

When your kitchen is clean, the counters hold:

Since the kitchen counters are relatively clear, it would take a lot more items out of place for your kitchen to start looking messy.

Now, I’m not saying you have to purge your home of all of its stuff just so you can have a clutterfree home that looks like it’s out of a magazine. While those homes are nice to look at, decluttering is not about the stuff — it’s about the life you want to live.

Take a moment to look at the stuff in your home. I mean, really look at it. What items do you use on a regular basis? Can you let go of less used items in order to make it easier to use the frequently used items?

I talk about this a lot with my 6 year old, who just like me, struggles to get rid of pretty much anything. When we’re decluttering his toys, I remind him that I’m not going to get rid of anything he loves to play with.

And in fact, by removing the toys he doesn’t play with much, we’re making space for the toys he LOVES to play with.

Listen, I get it. It’s hard to let go of stuff (even if you logically know you don’t need it). I’m a reformed hoarder who was able to let go about 70% of my stuff and while I won’t say I no longer struggle with decluttering (because I do still struggle)…I’ve realized how much easier my life is the more I let go of the stuff that’s not serving me.

And I want the same for you.

One of the best clutter solutions you can implement is to keep less stuff so that you have room for the things you really really love.

For the most part, I don’t implement any super sophisticated organizing system. Our pantry isn’t labeled with all the cans stacked with their labels facing out. My makeup is organized in a simple organizer I got from the dollar store.

You see, when you have less stuff, you don’t have to go crazy with labeling and organizing. There is room on your shelves for the items you use frequently.

Rather than going to the store and buying up a bunch of new organizational systems, first work on getting rid of the stuff you don’t use. This will help free up space for the things you actually use (making it way less likely you’ll have an avalanche of stuff falling out every time you open the closet).

Dana K. White has a great way of looking about this. In her book “Decluttering at the Speed of Life”, she talks about something called the container concept.

Here’s what the container concept is in a nutshell:


Let’s say you find a bin to house all of your socks. It looks like a good size. You start by filling up the socks that you wear the most. The ones that are comfortable, or maybe even the ones that are goofy and fun.

Once the bin is full, donate or throw out all the rest of the socks in your pile. That’s it. Don’t go looking for another bin or try to shove in more socks.

Obviously, there’s some wiggle room with this rule. You might realize the container you picked was too big or too small and make adjustments.

But the idea that you should pick the items you like first and when you run out of space makes total sense and can be a life changer.

This is probably one of the best clutter solutions I can give you. It’s so simple, yet extremely transformative. And that’s this:

Simply put, it’s a box or bin that stays in a particular area and is the designated place for your donations to go.

This is life changing because it takes decluttering from a project to a habit.

Think about it: normally decluttering is seen as this big project. You set aside a large chunk of time, then go through all of your items and declutter your entire home in a weekend, week or month.

Then most decluttering experts will have you believe that you never need to declutter again. Because in their mind, you’ve dealt with the clutter and that’s that.

But that’s not that.

Because clutter isn’t the problem, it’s the symptom.

Clutter is the result of the habits that you do on a regular basis. That’s why, if you quickly clean up your whole home but don’t address the habits, you’ll find yourself in the same mess (if not worse) 3, 6 or 12 months down the road.

A decluttering box changes all that. As you go throughout your day, you’ll find things here and there that you think “Hmm, I don’t really use this thing.”

With a designated spot for all your donations to you, you can immediately pick up the item, walk over to the decltutering box, put it in, and be done with it.

Since you’re incorporating decluttering into your everyday life (instead of waiting for a magical weekend where you’ll not only have the time but also feel motivated to declutter), decluttering becomes a habit instead of a project.

And since you’ll always have stuff coming into your home, you’ll always be somewhere in the process of decluttering. Which means, you won’t yourself in the same mess a year from now.

Now, I’m not the best with actually taking my donations to the donation center. Here’s a picture of my decluttering box:

The original decluttering box is so hidden by stuff, you can barely even see it (it’s in the corner under the Kohl’s box).

But even if you let the decluttering box turn into a decluttering mountain like me, the point still stands: having a pre-designated place for your donations to go can drastically speed up your decluttering by making it a part of everyday life.