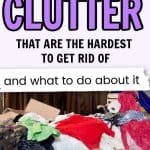 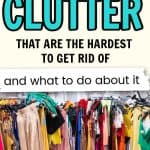 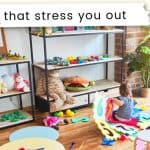 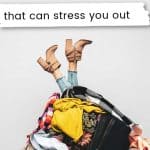 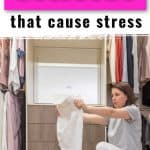 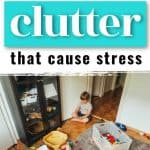 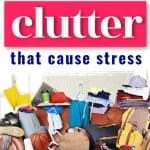 In this post: If you struggle with clutter, here are 5 types of clutter that will stress you out — and what to do when you don’t know where to start decluttering.

When I was pregnant with our first child, we had a hoarder room that we affectionately called “the blue room”. We called it that because of the shag blue carpet covering the floor.

Because of its location nearest to the heater (which is a big deal in the cold and long Wyoming winters), we decided the blue room was the best place for our baby nursery.

Only one problem: the blue room was packed with junk. It was filled with all the types of clutter we didn’t know what to do with, and would stuff in that room “for later”.

By the time I was 8 months pregnant, the room was still packed wall to wall, with the floor completely covered by junk.

My non-hoarder husband did the thing most husbands with a pregnant wife would do — he said he’d take care of it.

His one rule was that I wasn’t allowed in the room until he was done and I couldn’t see any of the donate boxes or trash bags.

You see, I’m the hoarder of the family, and it’s emotionally painful for me to get rid of clutter, ESPECIALLY when it still has some value (or at least perceived value).

Over the last five years, I’ve worked to change my hoarderish habits to completely declutter my home and get rid of 75% of our belongings.

Most decluttering methods will tell you the strategy, but very few people are talking about the emotional side of clutter.

If you struggle with clutter, first know that you’re not alone. One survey found that 54% of people are overwhelmed by clutter.

Second, know that having clutter is nothing to be ashamed of; it doesn’t mean anything about your value. Clutter is just the result of our habits, and the good news is that habits can change.

In this post, we’ll discuss 5 types of clutter that may be stressing you out, and what to do about it.

Sentimental items are so difficult to declutter because you know they can’t be replaced and they evoke an emotional reaction (aka they give you warm fuzzies).

Over the last few years, my parents have been doing the slow process of sorting through their decades worth of stuff in order to downsize.

My mom packs up photos, memorabilia and other sentimental items, and then sends them in the mail to me. I promptly open up the box, sort through the items and only keep the most cherished things.

While I would like to be the kind of person who can easily go through sentimental items and only keep the most valuable…I can’t because it’s so hard.

Instead, I take the box and shove it into the closet, completely unopened. That seemed like a good option until my closet started to fill up with unopened, flat rate boxes.

Here are some reasons it’s so hard to get rid of sentimental items:

Before you solve the problem by shoving sentimental items into a closet (ahem), follow these steps to help make the process easier.

#2: Broken but You Could Fix It

You know the types of clutter that are kind of broken or damaged…but you could technically fix it?

This could be a shirt that missing a button, a toy with a loose part or

The pot slipped out of my hands, crashing to the floor, making the chili explode everywhere. It got on the floor, on the cabinets, on my pants, in my hair…

I was so mad at my mistake (the dogs, however, were happy). After I cleaned up the chili, I noticed the pot.

It had a big dent in the corner that had hit the floor. It was unusable.

I could theoretically replace pressure cooker pots so it seemed like a waste to throw out a perfectly good pressure cooker, when I could just buy a new pot for it.

5 years…and you know what I still have in my kitchen? That’s right, a pressure cooker that doesn’t have a pot. 🤦🏻‍♀️

It can be hard to get rid of the types of clutter that you can fix. I know it. I’m proof of the struggle.

Landfill guilt is a real feeling that makes you feel guilty for adding to the waste problem. But here’s the thing: your home is not a landfill. Don’t treat it as such.

Stop waiting for this theoretical time to happen where you have all the time in the world and magically decide the best use of your time is to fix broken clutter (instead of binging Netflix).

When you set the deadline doesn’t matter. It could be in one month, 6 weeks, 6 months, the end of the year, etc. What’s important is to set a deadline that you resolve to throw away the broken types of clutter by that point if you haven’t made it a priority to fix it.

This next type of clutter is one of the easiest to get rid of…but it often takes over our homes without us realizing it.

Have you ever gone through your purse to find a receipt for gum, a shopper’s card to a supermarket you don’t frequent or a flyer for a festival that happened months ago?

This stuff is TRASH.

The only reason we hold onto this type of clutter is that we don’t set up regular times to throw them out.

As long as you live in this world, you’ll accumulate clutter and trash. If you don’t go through it on a regular basis and throw it out, it’ll pile up.

One of the easiest ways to deal with this clutter is to throw it out as soon as it’s no longer of use.

To catch the things you didn’t throw out immediately, make a habit to do a quick walkthrough at the end of the day to throw out any trash laying out.

Oh my gosh, don’t get me started on keeping gifts out of obligation. I know of one woman who kept a sweater for years, never worn, because she didn’t want to offend the person who gave it to you.

Let’s break this down.

When you keep a gift that you never use and might not even like just because you don’t want to offend the gift giver, you assume the gift giver…

Kind of ridiculous, isn’t it?

I’m going to get sassy here: if the gift giver will check up on you and be mad if you got rid of the item…then they don’t really care about your wellbeing.

Think about it. I know it sounds sassy, but when there’s a known correlation between clutter and anxiety and they just want you to keep clutter for their personal satisfaction of giving a good gift…they don’t care about your well being.

That’s like me saying, “I know you hate Zoolander and all, but I’m going to make you watch it every Friday. I’ll check up on you to make sure you’ve seen it, and if you don’t go see it, I’ll be extremely angry with how uncaring you are.”

Doesn’t that sound ridiculous? Of course it does! Because it is ridiculous.

So, don’t put up with the same behavior when it comes to gifts. If you don’t like the gift, find someone who will.

That sweater in the back of your closet that you’ll never wear would be much more worthy being donated to someone who will go cold without that sweater.

You ever buy something really expensive and think it’s going to be the greatest thing ever…but then you don’t really use it at all? Me too.

This could be a fancy outfit, a new treadmill or an electric juicer. You feel guilty getting rid of it, because it feels like a waste of money, right?

But here’s the thing: keeping types of clutter that you don’t use doesn’t make it any more valuable than if you donate it. In fact, I think it makes it less valuable.

Over time, items wear out or become outdated. The first Apple computers sold at a price equivalent to $3000 in today’s money.

If you could get a brand-new computer today with the same specs, would you spend that much? Absolutely not. Because technology has changed so much that the cost for older technology is much cheaper.

The good news is that you can sometimes sell more expensive items to recoup some of your original costs.

If You Struggle With the 5 Types of Clutter, Do This:

The bad news is that it’s your habits that have caused clutter to accumulate. The good news is that habits can change, and I’m here to help.

Check out this freebie to start your journey to a tidy home.