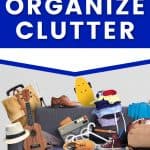 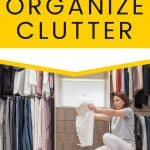 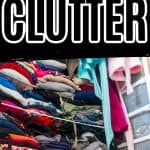 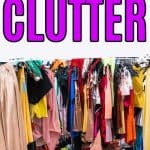 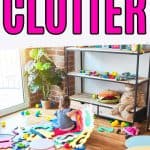 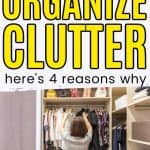 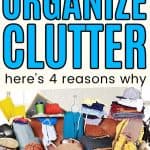 In this post: If you’re overwhelmed by too much stuff, and think all you need is the right organizing system, think again. Here are 4 reasons you can’t organize clutter.

I’m a hoarder. Well, reformed hoarder that is.

I’ve been messy my whole life. I remember going over to a friends house and seeing how she organized hundreds of hair ties around her mirror.

My bedroom, in contrast, only had a walkway from the door to the bed. The floor was covered with all sorts of junk that I never used or even looked at.

I have tried every decluttering method and organization system you can find. Nothing worked for me until I realized, plain and simple, that I just had too much stuff.

If you’re struggling with clutter, just realize you’re not alone. It’s something many of us struggle with. It doesn’t mean anything about you or your worth.

A messy home is just that → a home that is messy.

The bad news is that an organizing system isn’t going to fix your problem. The good news is that your clutter is based on your habits and habits can change. I’m here to help.

#1: You Need Space to Organize

So often, when we’re struggling with anything, we want to find the quick fix to solve the problem. But just as that doesn’t work for other things like losing weight or getting out of debt, there’s no home organization quick fix.

Attempting to organize clutter is fruitless, because in order to organize, you need extra space.

Let’s say you have a drawer in your bathroom that’s packed to the gills with toothpaste, makeup and deodorant.

Sure, you could take everything out of the drawer, put like items together, then attempt to put them all back in the drawer. But chances are, if the drawer was packed in the first place, it will be packed when you put the stuff back.

You see, you have to get rid of clutter in order to create space to organize. This idea that the key to solving a cluttered home is just to find the right system to organize clutter…it’s completely false.

Rather than buying another organizing system, get rid of the stuff that you don’t like or use and that will make space for the organization to come later.


#2: Clutter is Hard to Maintain

I have a one year old. And one of his favorite pastimes is to go through drawers and cabinets to pull everything out. (Cabinet/drawer locks never seemed to work for my kids.)

I don’t mind too much, he’s not super destructive. What I do mind is picking up things over and over…that I’m not even using.

Let’s say you’re a lucky one and you don’t have a toddler pulling stuff out of your cabinet. You know what? Clutter is still hard to maintain.

At the end of a long day, you’re ready to flop on the couch, but notice that there’s a few stray items still sitting on the kitchen table.

The more stuff you have out in your kitchen, even when it’s “clean”, the more you have to clean up every day to make things look tidy.

Whereas, if your kitchen table is typically bare and your counters only have a few things on them (like the knife block and the blender), having a few spare items laying out of place doesn’t make things look cluttered.

Unless you have a rich uncle you haven’t told us about, I’m guessing you don’t want to burn money.

Clutter costs money to buy. This one is pretty obvious. Odds are, someone forked over money to buy that DVD of Water World or the fancy plates you never use.

The money is already spent, so don’t keep clutter out of guilt for how much you or someone else spent for it. If you don’t use it, it’s clutter. Get rid of it.

Regardless of where you live, it costs more to buy a 2500 sq. ft. house than it does to buy a 1000 sq. ft. house. So why would you pay to store your clutter, when you could have a smaller, cheaper house with the same amount of living space.

Now, I’m not saying you should move into another place. What I’m saying is there’s a cost to store clutter, whether it feels like it or not.

It costs money to organize clutter. Lots of retailers will have you believe you need to buy tons of organizing systems in order to have an organized home.

When you have less clutter, it becomes much easier to organize, because you’re not trying to fit everything in like a jigsaw puzzle.

When the stuff you use and love isn’t bogged down by clutter you don’t, it has room to breathe. This means you don’t have to have everything “just so” in order to have a tidy home.

You see, getting your home in order isn’t about the stuff. It’s about the life you want to live with that stuff.

What would you do with an organized home? Would you start a business, train for a marathon or bake cookies with your kids?

The whole point of organizing your home isn’t to impress unexpected guests. That’s a lame reason.

Rather, the point is to create a home that serves as the launching pad for your dreams.

Who cares you can perfectly organize thousands of spices in your pantry if you hate to cook? Why would you organize hundreds of DVDs if you only watch YouTube?

You see how silly it is to focus on the stuff? It’s missing the whole point.

Rather than trying to organize your clutter for the sake of keeping it all, first, determine the dream for your home. Then get rid of the clutter (aka roadblocks) that are keeping you from your dream.